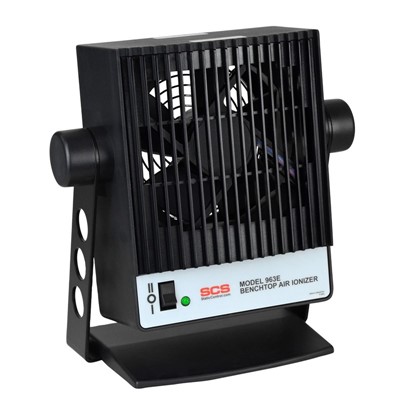 The SCS 963E Benchtop Air Ionizer is used to eliminates the build up of potentially damaging static charges. It is primarily used to control static charge on nonconductive materials. Ionized air can neutralize static charges on circuit board substrates, insulating tapes and plastic objects found in the work area. Some key features of the SCS (3M) 963E Benchtop Air Ionizer are the two-speed fan, power indicator lamp, and static-dissipative plastic housing. When using the low speed fan setting it does not disturb paper or delicate parts and is extremely quite. The high-speed fan setting can be used for more rapid neutralization of static charges in environments where faster decay rates are required.