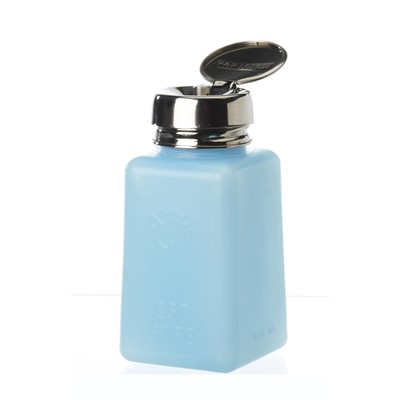 The R&R Lotion SD-6-ESD is a 6 oz., ESD-safe solvent dispenser with a standard pump. R&R Lotion has developed a new process of molding polyethylene bottles with a concentrate that does not contain "ethoxylated tertiary amine," which is widely used as an anti-static agent. These ESD-safe bottles have an average surface resistance of 109 to 1010 and do not have the undesirable features associated with surfactant-laden material. The bottles dissipate a charge of ±5,000 volts in less than two seconds at 40% RH!